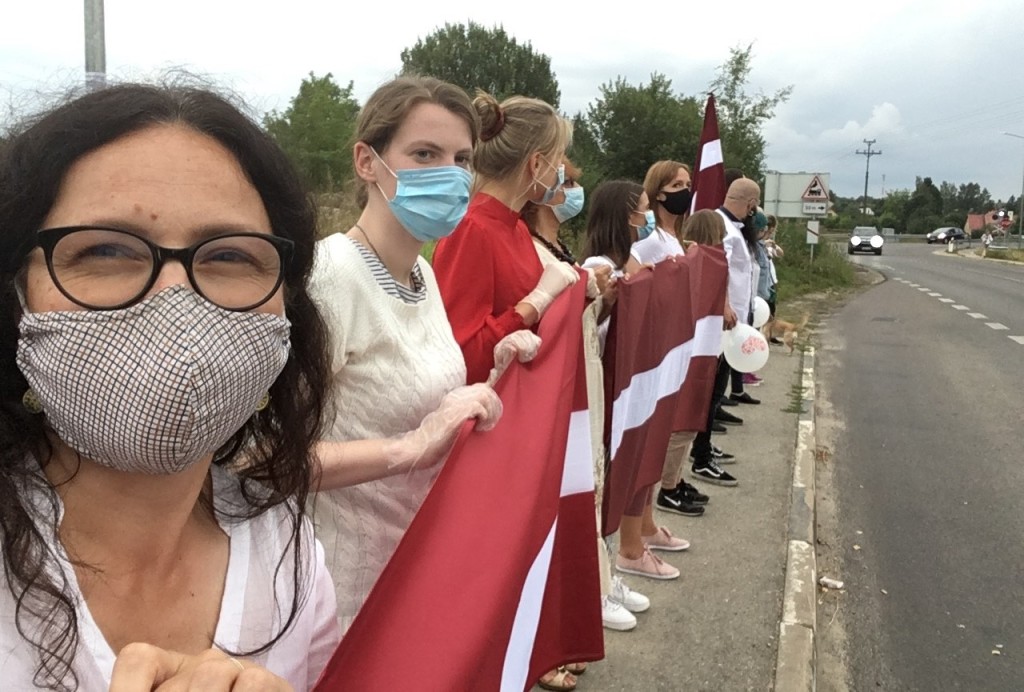 Last Sunday, August 23, I went on a very special pilgrimage to Lithuania. Quite different from what some may expect when hearing this word, but the kind I find the most meaningful spiritually – for a special cause and on behalf of others. This time to show support for the ordinary people of Belarus who have been protesting against the authoritarian rule of Alexander Lukashenko,  the rigged election results from August 9 and the state brutality and injustice that has followed.

Belarus borders Latvia but in so many ways it seems like a far far away place. Actually I have never been to Belarus. Not that I do not want to, but we, Latvians,  tend to live with our backs turned to the East (namely Russia) and faces turned to the West (European Union). Metaphorically! Especially since joining the European Union in 2004. The eastern borders in ways remind us of the not-so-distant past and the oppression by the totalitarian system of the USSR. The antagonistic feeling has grown stronger because of the authoritarian regimes in Russia and Belarus and the ways that Soviet past is still glorified in those countries.  Alexander Lukashenko has been in power in Belarus since 1994 and has been steadily building up the “strong man” myth – that it is better to be ruled by iron and fist as long as you have food and security. When this ” iron and fist” brutally and violently came down on thousands of peaceful protesters this August, any kind of pretense was gone. A president, who walks around in army fatigues, brandishing an AK 47 assault rifle and threatening a swift punishment of all opposition,  has lost any legitimacy as a leader.

I have watched the horrifying eye-witness videos, read the victim’s stories of beatings, arrests and torture, seen the photos of massive protests, read the statements from the church leaders in Belarus calling for the end of violence and police brutality… and have felt helpless. How can we show practical solidarity and compassion to our suffering neighbors in the time of such struggle for freedom and justice? People in Latvia have been demonstrating in front of the Embassy of Belarus, have been donating and sending money to different groups and NGOs and the social media profiles are flooded with the flag of Belarus.

I knew I had to put my feet where my Facebook is. So, I signed up to join a group of grassroots volunteers and activists to drive to Vilnius, the capital of Lithuania, and to show solidarity by joining the human chain from Vilnius to the border of Belarus. It is a distance of only 32 km. “The Lithuanian human chain marked the anniversary of a mass protest on August 23, 1989, when 2 million people joined arms across the three Baltic states of Estonia, Latvia, and Lithuania. Known as the Baltic Way, it was a peaceful protest against authoritarian Soviet rule.” I have very vivid childhood memories from 1989 when we stood there, joining hands physically but also sensing the support from people all around the world who understood our longing and hopes. Now in 2020 we, Latvians, Lithuanians and Estonians, find ourselves on the “other side” of this post-Soviet reality and domain, while the society in Belarus is in the middle of an existential struggle and nobody knows if it can reach the tipping point.

So, we went by bus. It was a long day and very long drive. The organizers estimate that up to 50,000 people participated, many of them dressed in white and wearing face masks to prevent the spread of the corona-virus. One thing we did not expect was that we (and thousands of vehicles) would get stuck in a major traffic jam since so many people were trying to make their way to this Vilnius – Minsk highway. Our bus crawled and crawled until we realized – we cannot reach the highway by the designated hour at 7pm. And we did what everyone else did – jumped out of cars and simply started joining hands wherever we happened to stop. Our group had the Latvian flags and soon other Latvians joined us. Then more people came and joined. Afterwards we found out that our small chain had participants from Latvia, Lithuania, Belarus, Russia and Ukraine.

I felt very emotional and still feel emotional writing these words and remembering these faces of the young people from different countries. Actually I did not see everyone’s face since most of us wore the face masks. But I remember the eyes and the eyes were communicating more than words. We looked at each other, joined our hands, will, mind, heart and experienced something truly spiritual and unforgettable. I knew that in that moment on some small road in a suburb of Vilnius we had a very clear understanding of “who is my neighbor”. The people of Belarus are our neighbors and right now they are in an urgent need of support, compassion, justice, solidarity, prayers and help.