“Some people cross your path and change your whole direction”… Looking at these words written on a wall in front me while sitting at the most popular coffee shop on my grandmother’s street. (btw, this franchise is called Hedgehog-In-The-Fog in case you are looking for a cool place to hang out with friends in Rīga)

Simple but profound statement! Not just people, but also places… change the direction. Like Cairo, Egypt where I had the privilege to do volunteer work in different projects some years ago. For many Egypt may be a place to go on a vacation to some Red Sea resort, visit the Giza pyramids or other  places of ancient history. For others it may be a place to stay away from since there has been such political turmoil in the last decade and the news headlines often give a grim and confusing picture.

For me it was a place where I met some amazing people and learned some very important things. To name just a few – I learned about the Coptic church and other Christian communities and the challenges they face; learned more nuances about the geopolitics of the region; learned more about the Islamic culture and faith. I learned the life in different suburbs of Cairo (after spending time in most of them) but I cannot say I learned to love the public transport (you have to learn to be pushy) there. And, of course, the food (most of it very delicious).

The greatest impact on my life was the people. Like the team of Sudanese refugees who were learning to become teachers for their community in exile. The man with the vision was pastor Abraham (almost wrote “father Abraham” 🙂 ), a refugee from Sudan himself. He was from the southern part of Sudan before South Sudan was officially formed as an independent nation. He was so tall I had to bend my neck to look him in the eye (most of Sudanese men were very tall) and had the biggest, most reassuring smile.

“Cush Mission for Rebuilding” was exactly what its title meant. “Cush” is the name for the ancient kingdom mentioned even in the Bible. “Mission” was the calling and passion and “rebuilding” was the vision, dream and even courage. Many afternoons I stayed with the group as they were sitting in the circle and discussing all the challenges they were facing as refugees. And all the challenges they would face one day returning to their homeland. The group was inter-faith (Christian and Muslim) and they openly discussed the religious aspects of the violence, conflict and war in their communities back in Sudan.

Just by listening, I was overwhelmed by those hardships and obstacles but also inspired and personally challenged. In the midst of  a conflict where many people would blame religion as one of the causes of sectarian violence, I saw how religion can also be the greatest resource for peace building, restoration, healing and reconciliation. There were no easy, glib, cheep answers or solutions but there was an acknowledgment that faith and trust in loving, just and merciful God is a source for this hope and vision. What amazed me and went against all my preconceived ideas was how both Christians and Muslims were together learning from the life, words and works of Jesus of Nazareth!

As I continue being involved in peace building work and often in a religious setting, I often think of this experience in Cairo. It gave me a glimpse of possibility, not impossibility; an example of confidence, not fear; a taste of hope, not despair. Just like this letter which I kept. 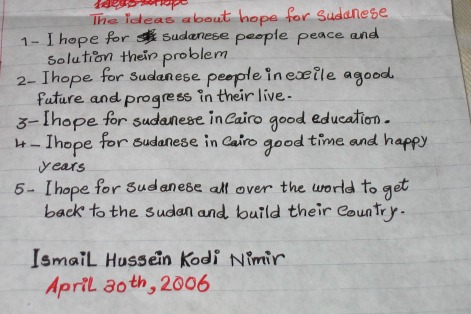