No hiding from horror

My eyes see it and my mind and heart chokes. How many more dead, injured, crippled, orphaned, traumatized and scared children are we going to see in our news? A report after a report, a story after a story. I know this is not new or isolated tragedy and many atrocities are happening in other parts of the world. But Syria alone is enough to shock and shake the global community. What happened to our “Never Again”?

I am just going to vent my frustration, anger, grief and sense of helplessness here. I don’t have any brilliant advice for the United Nations or European Union or USA or Middle Eastern leaders. (I do have a few things to say to Vladimir Putin of Russia but he is not asking for my opinion.) I am no expert on diplomatic, political, military or even humanitarian solutions. I have lots of experience from working as a volunteer in places around the world, including helping people from war zones  but at the moment I feel so distant and powerless. Still I feel deep inside that the little children in Syria would ask me the same question they would ask any adult: “Why is this happening to me? Did you know that this was happening to me? Did you try to help me? Did you try to stop this?”

Chemical attack??? Growing up in Latvia and learning our history, the only time people in Latvia experienced this kind of terror was during WWI when the German army used poisonous gases in the trenches. We are still shocked and horrified and it took place in 2016. That was 100 years ago! Think about it… 100 years!!! And I thought that humanity had learned something.

Yes, of course, the chemical attacks is not the only form of violence that shocks us to core. So is beheading people and torturing them and burning them alive or any other form of attack on human life and dignity. Tragically we have become so desensitized that we accept much of it as normal or inevitable.

I know many people who are doing their best to help children affected by war and suffering. I support these kinds of projects and initiatives as much as possible because there is always something practical we can do. If we want to be the hands and the feet that deliver the aid, there are always possibilities and ways to do it.

Also I don’t underestimate the power of our prayers. I almost hesitated to mention prayer because it can stir strong emotions. “Don’t even mention God. If there is a just and good God, why is he allowing this?” For others, they believe that God cares but they don’t believe that our interceding matters.

I believe that it does matter but I also believe that we need to be ready to be the answer to our own prayers. If we pray for the children to be protected and healed and restored, we can support those who are on the ground in Syria giving this kind of help. Or those who are helping Syrian refugees in neighboring countries. Or helping the Syrian refugees in our own countries.

If we pray for our governments and leaders to do something about it and for people who can make the difference to have the political will, wisdom and courage to make decisions and implement them, then we need to be ready to support those decisions. Or to keep the pressure where the will, strategy and vision is lacking. Which embassy or government building we need to protest in front of?

The headlines say “The Syrian war is the deadliest conflict the 21st century has witnessed so far.” You have to agree that not just this century but this millennium has not started very well. But these children don’t need to hear about historical mistakes, geopolitics, ideologies, ambitions and the rest of our junk. They need real love and justice in action. 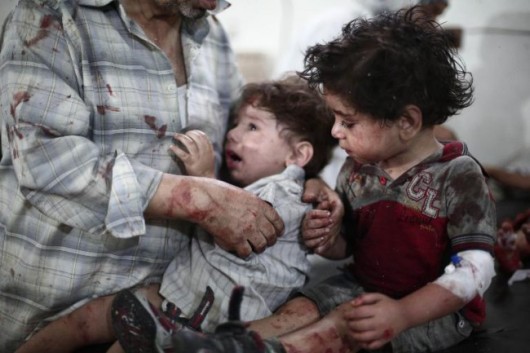